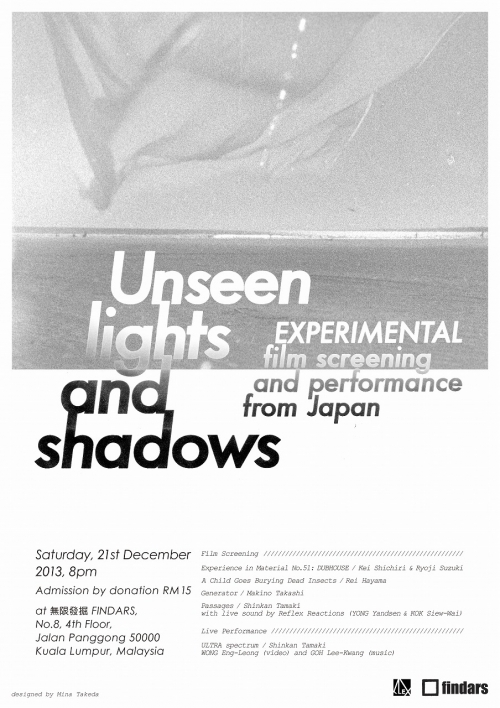 —
Profile:
Kei Shichiri
Born in 1967. While in high school, his first film “Existence Flicker Symptom” (1984) won a prize at the 8th Pia Film Festival at the recommendation of renowned filmmaker Nagisa OSHIMA. Many of his works are collaborations with artists in a variety of genres, including “Hottentot Apron ? A Sketch” (2006), an art film produced by Aichi Arts Center (AAC); “Aspen” (2010), a short dance piece featuring dancer Ikuyo KURODA; and “DUBHOUSE” (2012), an experimental short made in cooperation with architect Ryoji SUZUKI. “Before the Day Breaks” (2007), a film comprised of unpopulated images that illustrate a story told by off-screen characters, has been screened every year in Japan by popular demand. In addition, he endeavors to enhance screenings of his works with experimental audio performances that utilize live music, an acousmonium system, and more.
keishichiri.com

Rei Hayama
Born in Kanagawa in 1987. After study painting, Rei started filmmaking in 2008. Rei’s experimental films summon unknown myths, unidentified countries and faceless characters in an uncertain era, seeking the boundaries between the worlds of human and natural existence as an attempt to get a glimpse of “others”: wild animals and forests, as opposed to humans and urban spaces. Wide range of her media is more freely crossed and developed through physical side of moving images like a development or re-photography.
http://reihayama.net/

Makino Takashi
Filmmaker born in 1978, lives and works in Tokyo. In 2001, Makino moved to London by himself to study music and lighting design at the atelier of the Brothers Quay. He continues to produce and exhibit films that make full use of the various techniques and methods harnessed from the twin media of film and video, treating both the image and its accompanying music as elements of equal importance.
http://makinotakashi.net/

Shinkan Tamaki
Born in 1982, Japan. Experimental filmmaker and pilgrim in search of never-before-seen images and new perceptual experience. He started making moving image with 16mm film in 2006. Main theme is to lead the audience’s perception to change naturally and sometimes drastically bycoming and going across borders between image and non-image, sound and image with extracting film’s materiality. The works have been screened at many film festivals, including International Film Festival Rotterdam. Recently, He performs to transform optical phenomenon into moving image.
https://shinkantamaki.net/

ABOUT THE PERFORMERS:
Reflex Reactions is YONG Yandsen (born 1976), improvised saxophonist and KOK Siew-wai (born 1977), improvised vocalist and video artist. The duo was formed in 2006. In 2009, they had monthly gigs at Findars art space, and in the same year, they went for a 1-week residency at the Green Papaya Arts Project in Manila, Philippines. The duo creates improvised musical conversations through attentive listening and communication with each other.

GOH Lee Kwang is internationally recognized sound & new media artist from Malaysia. He has created sound installations, sonic-visual interactive installations, single channel video, multi-channels video, electro-acoustic improvised music performance, tape music, composition for radio broadcast and soundtrack for theater / dance / independent movie. Goh’s works focus on the various possibility of both realistic & abstract, crossing the boundaries of digital & analog, electronic & acoustic, go beyond language, allowing audiences to experience the work directly, and in their own personal way. Most of his installation also operating interactively with the audience/ viewer.
WONG Eng Leong is an visual artist based in Kuala Lumpur, Malaysia. He received his Diploma in Fine Art majoring in painting from Malaysia Institute of Art in 2003. His works take on multiple forms such as painting, drawing, installation, video and performance. As a contemporary multi disciplinary artist, his work often deal with political and social issues. His work has been showcased at festival, galleries and privates spaces since 2000. He received Eng Tay Awards in 2001 and 2002. In 2002 – 2005, He was selected for a two and a half year grant ‘Talent for the World’. He was then awarded the Krishen Jit Astro Fund for an audio visual performance project ‘The Rain Project’ in 2008 – 2009. Wong is also one of the founders of Findars Artists Collective and one of the founders of Findars space. Findars space is an alternative multifunctional space in Kuala Lumpur, organized art exhibition, performance art event, indie & experimental music concert, audio visual performance and international film screening since 2008.